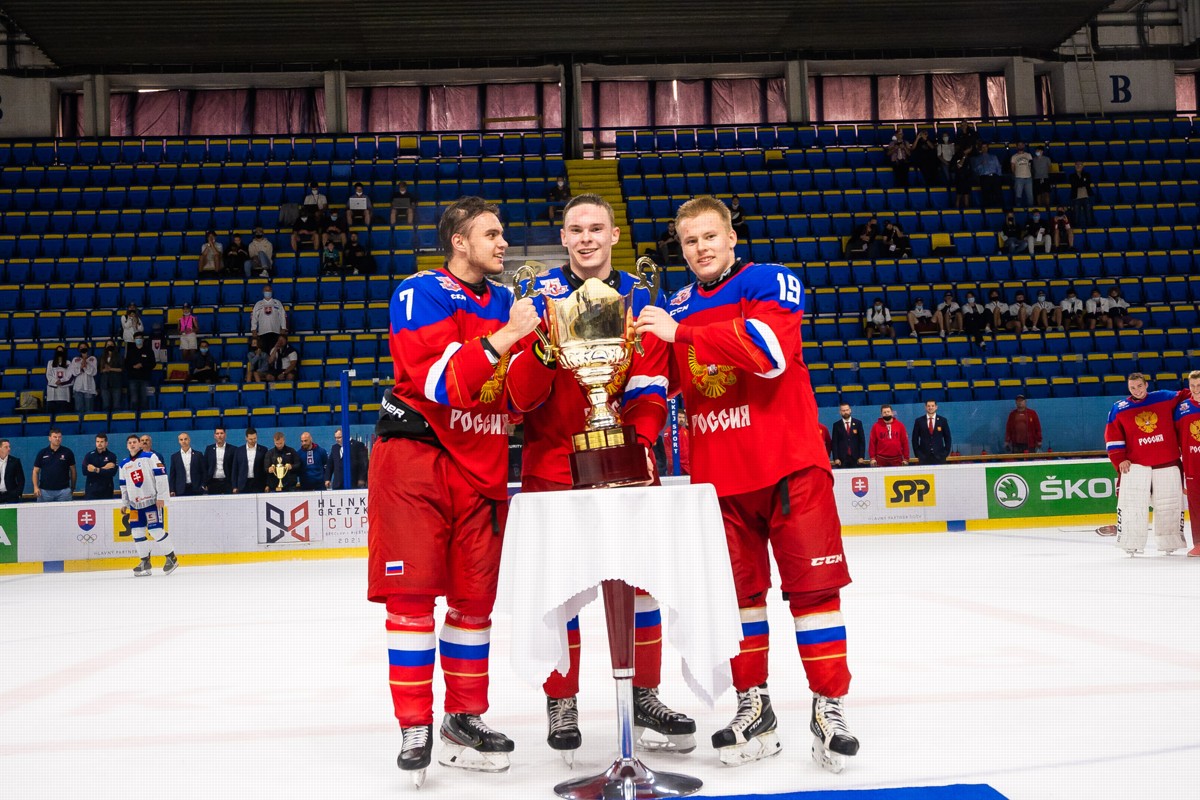 Miroshnichenko: “We did our homework”

Russia’s captain Ivan Miroshnichenko (in the centre of the photo with teammates #7 Ruslan Gazizov and #19 Matvei Michkov) is one of the top prospects available for the 2022 NHL Entry Draft. He also came up with a big game in the final of the Hlinka Gretzky Cup, scoring two momentum-changing goals to help his team to a 7-2 win over Slovakia.

Miroshnichenko doesn’t just score goals. He plays physical. He plays defence. He’s a good skater, a good passer, and is a strong motivator in the dressing room.

As head coach Vladimir Filatov said about his captain: “He’s a leader. The guys love him.”

The Slovaks came out with lots of energy in front of their home fans in Piešťany, but at 12:20 it was Miroshnichenko that opened the scoring on the power play. It wasn’t a typical power play goal, though, but rather a hardworking goal in which everybody on the ice stormed the net, overwhelming the Slovaks with their pressure before it finally went in.

Ivan, how did you manage to score that 1-0 goal?

We were a hardworking team tonight and the guys were battling hard in front of the net and doing pretty much everything. My job was just to score that goal and I did. Basically, it was a team effort.

The second goal came just after the Slovak team had scored, so it again killed some of their momentum.

They are an aggressive team so we tried to beat them on the counter-attack and that’s what happened on the second goal. This gave us momentum and that’s how we won tonight.

Slovakia had won four games until this point. What were you able to do that other teams were not?

We knew that they’re a very good team and we did our homework. We watched the video and we knew how they’d play against us, so we knew what the antidote is. And we did it.

Five wins in five games. How would you summarize the tournament for your team?

We played well and we got a bit better every game and even inside every game. We made a lot of adjustments and we finally found the right line combinations at the right moment in the semi-final.