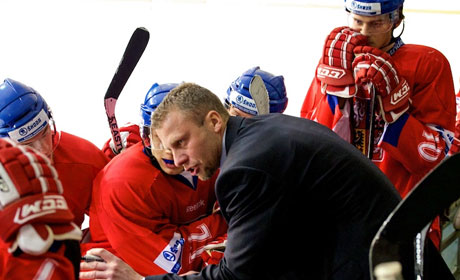 Jakub Petr: Big games are coming up, we want to succeed

While the country is in the midst of a summer heatwave, the Czech Republic´s U18 ice hockey team is getting in shape for the beginning of the season. On July 28, their last training camp in Třemošná finished. In the middle of the session, head coach Jakub Petr revealed his team’s plans for the near future and briefly assessed the opposition.

How is the camp going? Has it been affected by the weather?

Earlier this year we went through two training camps in Kravaře and Třemošná, both of which were focused on players´ fitness. So far we are content with how this is going. We don’t mind the weather, the conditions are pretty similar to those previous camps.

I assume the current roster is pretty much settled. Is that right?

We had five lines at the previous camps, and mixed with the roster a bit. Now we´ve decided on four set lines. The team composition is beginning to take shape. There is already some pretty good competition among players. We are tuning up for the tournament.

Do you have any idea about how the particular lines will look like? Or the goaltending duo?

Well, concerning us coaches, we do have some vision but it is too soon to make it public. Anyone who has been watching our practices might be able to have an idea. To Břeclav we will take three goalies. After the exhibition game against the USA, one will return to training with his club, and be prepared to re-join us in case something happens.

What are your plans for the upcoming days?

The team is getting back together on July 31 for the final few practices. Then there is the pre-tournament game [August 3, 6:30 PM CET], after which we will set the final line-up. For this game we will also have Jakub Vrána, who is with his team in Sweden right now. It´s a similar situation with David Pastrňák, who is part of the U20 roster. Both guys should join us in Břeclav. So the team will be narrowed down further.

The group draw looks pretty tough for you. What are your expectations for the group stage?

I don’t want to claim we are in the trickiest group. Every season is different. Anyway, I have to say that our opponents will have their best possible line-ups. Canada will bring here all their top-notch players. Or take the Swedes – this team won the most prestigious U17 tournament in Canada [World U17 Hockey Challenge, Czechs didn’t take part]. Then there is Switzerland, which has made huge progress in recent years. I don’t mean this to sound like an excuse. I would be a bad coach If I didn’t say we will try our utmost against tough teams such as these. It’s a great honor for us to host such a tournament. Some big games are coming up and we definitely want to succeed.

Thank you for this interview.