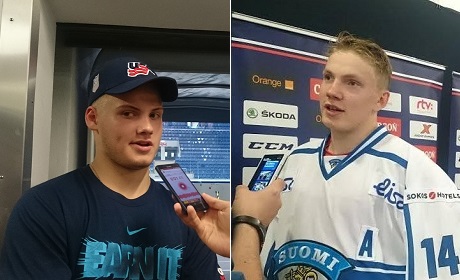 Finnish team has a great first period, when scored four goals and got close to the opening winning. It got it by final result 5-1, which talks about the big difference between team´s performance. “We started the game very well and played the whole match in that way. Second and third period weren´t as good as first part, but it was enough to win, so we have to be happy,” said Finnish forward Otto Makinen after the game. Opening of tournament is always important, teams need to catch first game and get points for play-off round. Finland had great first game and surprised the current world champions from USA. “We didn´t expect so big difference in result. USA had also many scoring chances, but our goalkeeper performed really well and stopped their chances. The result maybe don´t show the real difference at ice, however, that´s the hockey,” added the Tappara Tampere´s forward. He scored two goals, got one assistance and was the most productive player of opening game. “I am satisfied with my performance, it is mostly thank to my line-mates Emil Oksanen and Janne Kuokkanen, they are really good and it was easy to play with them,” boasted Makinen his team-mates. Finnish looked really strong and belong to aspirants for title. Makinen is modest and think just about the next game against Slovakia. “They are home team and will want to show their best hockey. We need to work hard and play well to win also this game,” said Finnish striker. In Bratislava is currently hot tropical weather without any rain or cold days. Players from Scandinavia maybe aren´t used to these temperatures. “It´s very hot, but I like this weather! However, the only problem is that is difficult to sleep during these temperatures,” finished Makinen with laughing.

Dayton Rasmussen entered the game after the first period and stopped 21 of 22 shots of Finland. USA performed better hockey in second and third period, but scored just one goal and have a think about lot of things. “We had slow start, the first period decided about the whole game. We have to discuss this in the team and change it in next games” said Rasmussen after the match. American goalkeeper hadn´t easy position, when he changed Dhillon during the first intermission. ,,Coaches said both us to be ready and prepared. I did my routine to get to the game, so it wasn´t big issue to be ready. I was prepared and feel ,,into the game” really fast,” said Waterloo Blackhawks´ goalie. He performed well and made several nice saves during the game. “I felt fine and got some good saves, but first thing is the result of the whole team. Our team lost today and scored just one goal, so I can´t be satisfied,” added Rasmussen in post-match mix-zone. There was clearly to see difference in mood between laughing Finnish players and sad Americans. They really didn´t catch the opening of Memorial. “Our team needs to find way for next games from improved performance in second and third period. We were definitely playing better and need to continue in this way for all matches here,” finished US goalkeeper. USA should be really prepare, it plays on Tuesday with big rival from Russia.