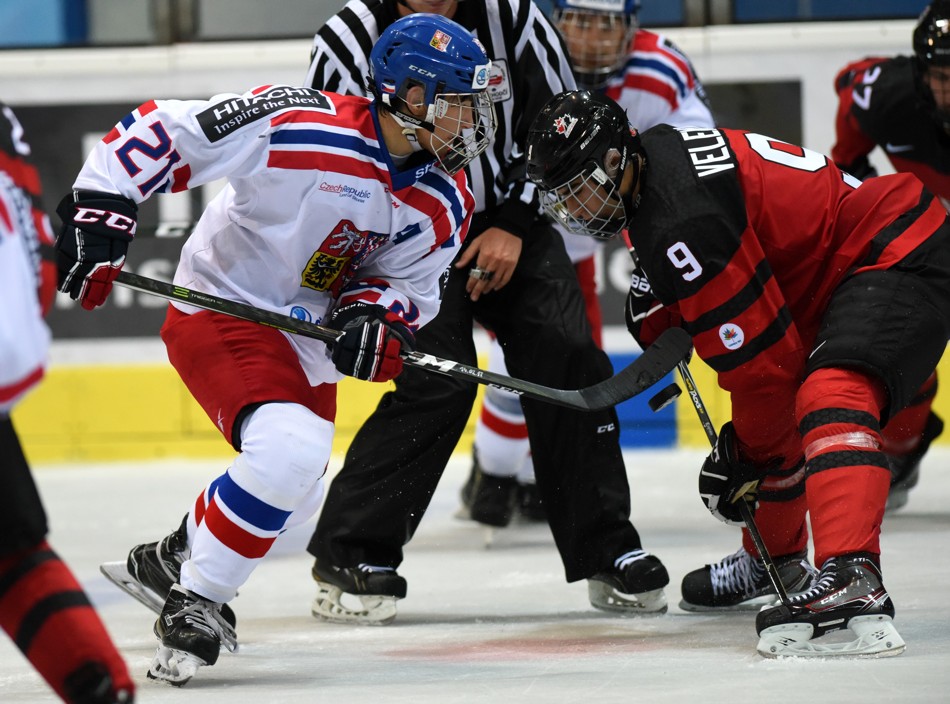 On the final day of the 2017 Ivan Hlinka Memorial Cup, the Czech Republic will attempt to defend its title on home ice against Canada, who will be going for its 21st title in 27 years. In the battle for bronze, Russia takes on Sweden.

Canada and the Czech Republic have met in the final of the Ivan Hlinka Memorial Cup on seven previous occasions, with the Canadians winning all seven times. Their most recent encounter in a final was in 2014, when Canada won 6-2 thanks to 3 points from Mitch Marner and 2 goals from Lawson Crouse. The Czech goals were scored by Radek Koblížek and Lukáš Jašek. It was the seventh straight Hlinka title for the Canadians, and they added an eighth straight in 2015, when they beat Sweden in the final 7-3, thanks to 2 first-period goals from Jean-Luc Dubois. In 2016, the Czechs won their first title by beating the Americans 4-3, thanks to to goals from tournament scoring leader Filip Zadina.

Now we’re in 2017, and just before the start of the tournament, the Canadians and the Czechs played a pre-tournament exhibition game in Břeclav, with Canada prevailing 3-1 in a physical contest.

“We had good moments in the game, of course, but there were also places where we were under a lot of pressure and did some things badly,” said Czech coach David Bruk. “We’ll go over it and tomorrow we’ll talk with the boys about how to deal with the situations. It is clear, of course, that Canada was better than us, but we stayed the game.”

“It was interesting, we worked hard, and we got our first taste of international reffing, which was different, for sure,” said Canadian coach Brent Kisio after the game and less than 48 hours after his team landed in Europe. “We’re going to learn from that, but give credit to the Czechs. They played really hard, they’ve got a great team, and it was a fun game. It was a hard-fought game, especially for a friendly match like that, and that’s what you want going into the tournament.”

Both teams finished second in their respective groups - Canada dropping a 4-3 shootout decision to Russia in their Bratislava opener, and the Czechs losing 7-3 to Sweden in their middle game in Břeclav. Then both teams upset the first-placed teams in the crossover semi-finals - Canada beat Sweden 4-1 in Bratislava and the Czechs beat Russia 2-1 before a passionate crowd in Břeclav.

The Czechs got goals from Jan Jenik and Jakub Lauko, who have 6 and 4 goals, respectively, in four games. With a strong and balanced roster, Canada has 6 points each from Barrett Hayton, defenceman Calen Addison and captain Joe Veleno.

“I cannot commend the boys enough, the game was just great,” said Bruk. “We stuck to our tactics, we played hard and our bench was on fire. We concentrated well, and the boys wanted win the game. Our goalie played really well, as did everyone on the team. The Russians scored early but it didn´t affect us. The end of the game was quite hectic, but in a game like that, you expect it to be a tight finish.”

“I thought Sweden played really well. It was a heck of a hockey game,” said Kisio. “Both teams went at it hard and it was tied going into the third period, and that’s what we expected. We knew they were a great team, and I was proud of the way our guys stuck with it and found a way to win.”

Lukáš Dostál and OIivier Rodrigue were the goalies of record in the semi-finals, and both are expected to start again in the final. Both goalies have won all three games in which they have played this tournament.

Looking ahead to the final, Kisio said: “We know it’s going to be difficult tomorrow - it’s their arena and their fans - but we’re just going to have to play hard and battle through it.”

After winning their respective groups without losing, both the Swedes and Russians had to travel for their semi-finals and lost, meaning that they will battle for the bronze in Bratislava, in a game that will be played at the same time as the final in Břeclav. This is becoming old hat for the Russians, who have taken bronze at the last two editions of the Hlinka Memorial. The last medal for the Swedes was a silver two years ago.

"Firstly, the ice wasn´t great,” Russian coach Alexander Zybin began in his post-game assessment of the semi-final. “We got a goal ahead, and then the referees seemed to see the game different. There were times when we had a power play, or should have had one, and ended up playing shorthanded. The Czechs had one player who was good, the rest just stayed in their positions. We weren´t good, they just put the puck into the neutral zone and we didn´t use it."

“I thought Canada was a little bit better than us today, but still it was 1-1 after two periods, so we had a chance, but small mistakes changed the game and I’d say the third goal killed us,” said Swedish coach Torgny Bendelin. “We won the group but still had to play an ‘away’ game and the heat in this arena was hard to deal with - we weren’t used to it. No excuses, I think Canada was better today, but some of the guys had problems with the heat. Now we have to come back here tomorrow against Russia, who is used to this arena, but that’s the way it is.”

The two teams feature two of the more prominent names of this tournament. The leading scorer is Russia’s Dmitri Zavgorodny, who has 4 goals and 5 assists for 9 points. The tournament assists leader is Swedish defenceman Adam Boqvist, who is also tied for the points lead among defenceman with Canada’s Addison. It should be noted that neither Zavgorodny nor Boqvist figured in the scoring of their respective teams’ semi-final defeats.