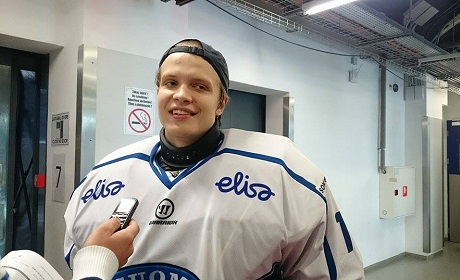 The Finns are the winners of the group B of the Ivan Hlinka Memorial Cup. Team Finland has nothing to worry about, because they were absolutely dominating so far in Bratislava. The Russians recognized the Finnish power us well. Now the Finns know, if they want to go the gold medal game, they have to beat their age-long rival Sweden.

The feelings of Finnish players immediately after the game against Russia were almost indescribable. Goaltender Severi Isokangas was maybe the happiest guy of all the Finns. Why? He was able to save all Russin’s shots.

”Of course, my feelings are excellent, we won 3-0. I think this result is pretty clear. Russia is maybe the best team in the World and we were able to compete with them really well. I’m very happy for that,” Isokangas said with smile on his face.

Isokangas also commended his teammates, especially in defense work. Finnish goalie had the biggest problems in the first period, but he was able to always keep the puck in front of the goal line. “Maybe the first period was the hardest for me. I got used to on a game, but after that it was good. My teammates also defended pretty well. They made the situation easier for me,” Karpat Oulu goalie told.

Severi Isokangas was in the net for two games, second goalie Niilo Halonen played one game. They both managed their jog really well. Now, there is a question. Who will be in the goal crease for the semifinals? “We have two excellent goalies and it’s going to be hard for coaching stuff to decide, who of us will be in the net for semifinals,” 17-years old hockey player mentioned.

After the game against Russia the Finns still didn’t know which team they will face in the semifinals. We asked Severi Isoknagas, which team he would like to play against in semifinals. “I would like to face Gustavsson. And I also think that the matches between Finland and Sweden are always a nice rivalry,” Isokangas said.

His wish became a reality. The Swedes beat Czech republic 2-0. It means that Sweden go to the semifinals from second place of the group A. Now we all can look forward to northern derby of final!