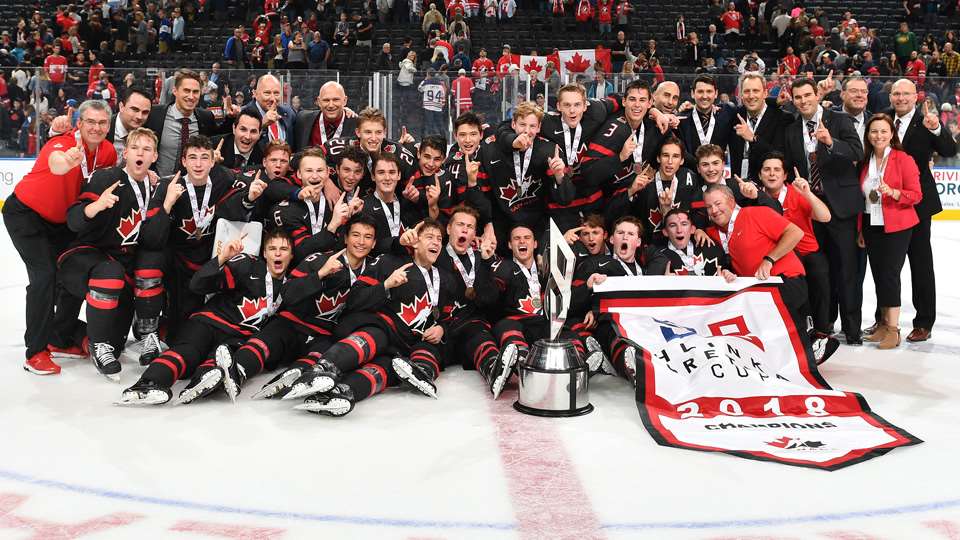 In August 2018, the Ivan Hlinka Memorial went overseas and was for the first time played under the new name Hlinka Gretzky Cup. The eight traditional participants measured their strength in Edmonton and Red Deer, Alberta. And it was full of excitement!

The Czechs traveled to Canada having captured medals in four of the previous five years, but shutout losses of 6-0 to the USA and 3-0 to Russia took them out of semi-final contention after just two games. An overtime victory over Finland in the last group-stage game put them in third place.

Meanwhile, in the other group, the Canadians were dominant, outscoring their opponents by a combined score of 18-5. They were joined in the semis by Sweden, while the Slovaks finished third in the group, setting up a game for 5th place between the Czech Republic and Slovakia.

After a disappointing group-stage performance where they garnered only one point from three games, the Finns broke out in the game for 7th place, beating Switzerland in convincing fashion 8-2.

That game was followed by the match-up between the tournament’s two traditional co-hosts, the Czech Republic and Slovakia. The game was tied at its midpoint, but the Czechs broke out in the last half, and skated away with an 8-3 victory.

Late drama in both semi-finals

The first semi-final game between Sweden and Russia remained scoreless through two periods. In that final frame, the Swedes struck first but Russia tied it late, which appeared to set up overtime. In the last minute, however, Karl Henriksson delivered a fatal blow to help Sweden advance to the final.

The finish to the match-up of North American teams was perhaps even more dramatic. In a goal-filled game, Dylan Cousins tied the score for the Canadians just as time expired. However, the rules of the tournament did not allow the referees to review the video, and so the tying goal was allowed to stand. In the subsequent overtime period, Canada completed the comeback thanks to a goal by Josh Williams and won 6-5 to advance to the final.

Fight for the medals

The disheartened Americans were not up to the task of facing Russia in the bronze-medal game and fell 5-4, with Vasili Podkolzin recording three goals and one assist for the victors. Then in the final, Canada again fell behind early, this time 2-0. However, before the end of the first period, the Canadians stormed back to take the lead and there was no looking back. The final score was 6-2 as the players flooded their home ice in Edmonton to celebrate the victory.

Alexis Lafrenière recorded three points in the final win, and overall led the tournament with 11 points. He significantly contributed to the fact that this year in Břeclav and Piešťany, Canada will strive for its 23rd triumph at this prestigious tournament.